I’ve seen a lot of people express their opinions on Facebook regarding Serena-Gate due to the recent events at the US Open. I’m not going to get into the details of what actually happened nor will I share my point of view on the topic. The only thing I’m going to share about this is the great post made in r/PrequelMemes related to the aforementioned event. For those who don’t know about r/PrequelMemes, it’s a subreddit dedicated to posting Memes of the Star Wars prequels (in my humble opinion, the best trilogy of the series).

Here is the meme and its associated caption from reddit:

The image shows Carlos Ramos telling Serena Williams, “It’s over Serena, I have the high ground!” This is a reference to the final battle between Anakin and Obi-wan (see video below):

Once everyone on the subreddit takes the time to mentally process the beautifully crafted meme, they usually write a comment using a quote from the prequels but making it relevant to the meme itself. Rather than forcing you to wade through all the terrible references, I included some of the best responses for you:

This is a reference to when Samuel L. Jackson tells Anakin that he is on the Council but they do not grant him the rank of Master.

During Anakin and Obi-wan’s final battle, Anakin accuses his mentor of betraying him, “You have turned her against me!”

The last one might need some explaining. There is a subreddit called r/EmpireDidNothingWrong that basically claims that members of the Empire were the protagonists battling the rebel terrorists. 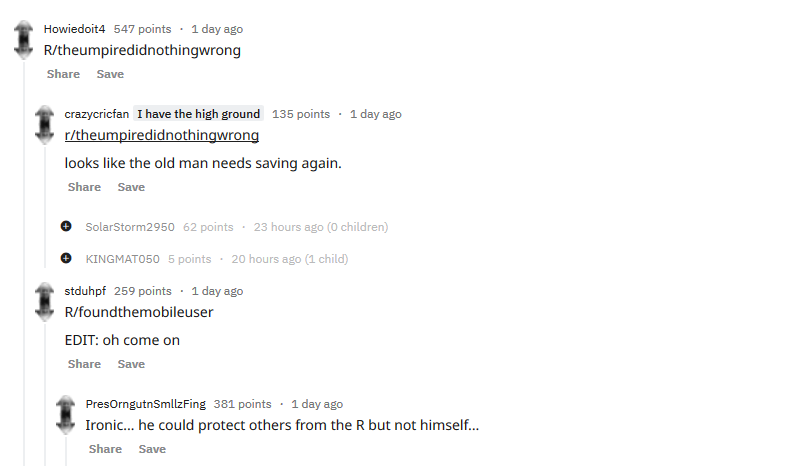 When you type “r/[insert whatever here]” reddit usually automatically links to the mentioned subreddit whether its imaginary or not. A couple of people had trouble with their phones changing the lowercase “r” into an uppercase “R” resulting in no link. This was the perfect opportunity for someone to cite the story of Darth Plagueis the Wise who could “save others from death, but he could not save himself.”

I hope everyone enjoyed reading my favorite quotes from the r/PrequelMemes post. Can you believe a large amount of Yahoo.com articles get away with posting articles like this where they simply post a bunch of Twitter reactions and call it journalism?